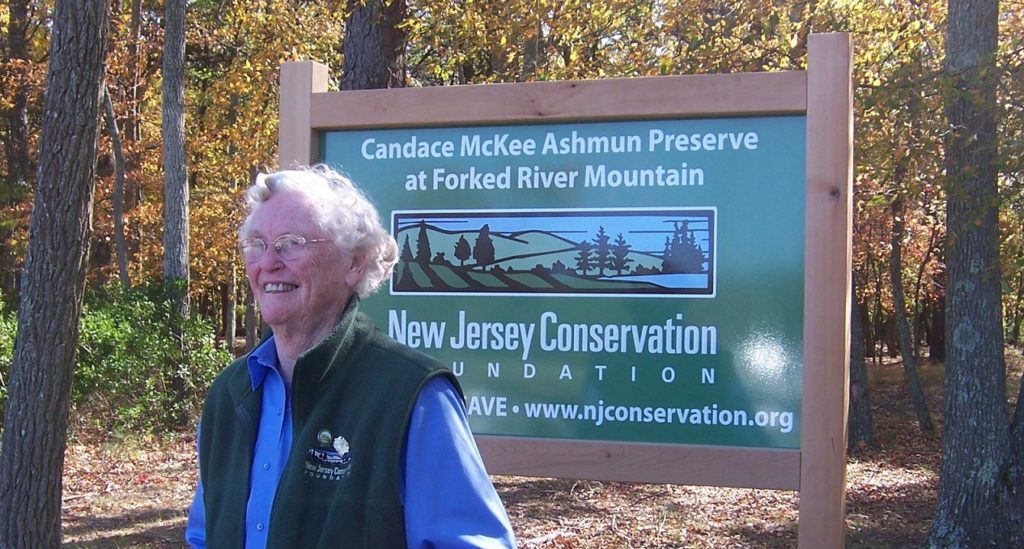 One of the greatest advocates for protecting the New Jersey Pine Barrens is someone who never lived there.

But Candace McKee Ashmun – better known as Candy to an enormous fan club of friends and admirers – is one of the most ardent defenders of the natural beauty and wildlife of the Pinelands, 1.1 million acres of near-wilderness stretching across parts of seven counties in South Jersey.

Candy has been a Pinelands Commissioner since the inception of the Commission in 1979 and is now in her 40th year – the only original commissioner still serving.

On Dec. 10, Candy was among 10 recipients of the Governor’s Award for Environmental Excellence. She received the new Richard Sullivan Award, named for the first commissioner of the NJ Department of Environmental Protection and given to a person who demonstrates exceptional leadership and outstanding accomplishment in safeguarding public health, protecting and enhancing New Jersey’s diverse natural resources, and creating vibrant, sustainable communities that provide economic opportunity for everyone.

A few days later, on Dec. 14, the Pinelands Commission unveiled the new Candace McKee Ashmun Education Center in Pemberton. This permanent exhibit highlights the importance of the Pinelands and its unique ecology, history and culture.

Candy grew up in Oregon, earned a degree in physics from Smith College in Massachusetts, and moved to New Jersey in 1946 after marrying her late husband, Charles. While raising three children, she worked a variety of jobs: editor and reporter at a local newspaper, freelance photographer, and water quality researcher and trustee at the Upper Raritan Watershed Association (now known as Raritan Headwaters).

In 1979, she got a call from then Governor Brendan Byrne asking her to serve on the newly-established Pinelands Commission. She readily agreed, having fallen in love with the subtle beauty of the Pines.

“By staying on the Pinelands Commission since its founding, Candy has brought her unique experience and deep wisdom to protecting the Pinelands, year after year, decade after decade,” said Carleton Montgomery, executive director of the Pinelands Preservation Alliance. “That continuity and depth of knowledge has been absolutely invaluable as each new generation of Commissioners, staff and public advocates have arrived on the scene.  The Pinelands would not as wonderful as it is, and many more harms would have been done to the Pinelands, if not for Candy.  And personally, I have always known that if I missed a beat or messed up in my work, I’d have Candy to answer to!”

Candy was also a founding director of the Association of New Jersey Environmental Commissions, where in the 1970s she mentored a group of young environmentalists, many of whom went on to become leaders in their own right.

I was lucky enough to be one of them, and Candy was and is a wonderful inspiration and mentor. In October 2010 we named a 4,000-acre property in the Pine Barrens of Ocean County “the Candace McKee Ashmun Preserve at Forked River Mountain.”

The list of those inspired by Candy’s example goes on. “She is actually one of the most courageous individuals I know,” said Cindy Ehrenclou, executive director of Raritan Headwaters.  “Candy is one of those people who basically was not afraid to initiate something, not afraid to go find out if there wasn’t a better way to do something and not afraid to speak out in public to say, ‘We need to do this – and we need to do it now!’ ”

Candy has also chaired the NJ Department of Environmental Protection’s Great Swamp Advisory Committee and served as a founding member of the State Planning Commission, trustee of the Coalition for Affordable Housing and the Environment, Vice Chair of the Fund for New Jersey and a board member of the Crossroads of the American Revolution.

Here’s to Candy Ashmun, someone who has worked tirelessly for seven decades to improve the quality of life for all New Jerseyans in so many ways. We all have a wonderful opportunity to follow her example. Thank you, Candy!

To learn more about the New Jersey Pinelands Commission, go to www.nj.gov/pinelands.

And for information on preserving New Jersey’s land and natural resources, visit the New Jersey Conservation Foundation website at www.njconservation.org.