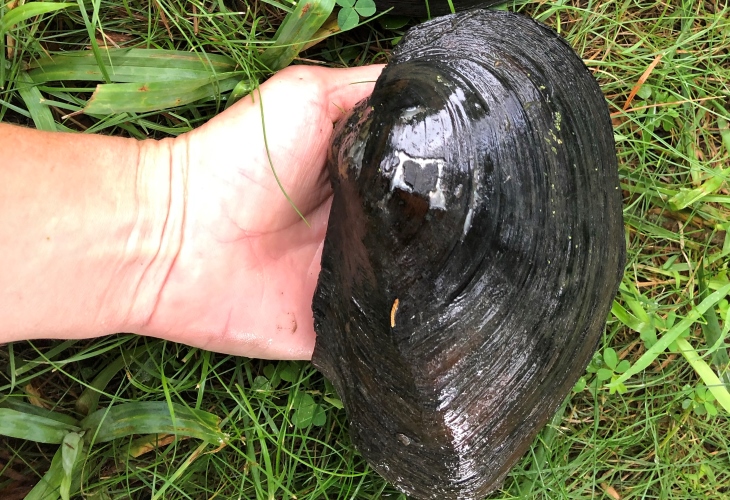 RARITAN TWP. – Many years ago, tiny “hitchhikers” went unnoticed in a tank of live carp shipped from China to a New Jersey fish farm.

The hitchhikers were the larvae of Chinese pond mussels (Sinanodonta woodiana). These highly invasive mussels have spread across Europe, but had not been documented in the U.S. until a discovery at the Hunterdon County farm in 2010.

Unseen, the larvae had established themselves in the muddy bottoms of ponds at the fish farm, which supplied carp to Asian restaurants in New York City.

But the discoveries didn’t stop there. Biologists noticed something else in the mud: mature Chinese pond mussels, some as big as dinner plates.

“This was the first population discovered in North America, and as far as we know, the only one,” said Tim Morris, stewardship director for New Jersey Conservation Foundation. “We knew we had to keep them from spreading.”

Chinese pond mussels, he noted, “have taken over some rivers in Eastern Europe, where they outcompete native species. Poland has been very affected by them.”

With America as the top biodiversity hotspot in the world for freshwater mussels, they also threatened populations here. Thanks to work funded by the U.S. Fish and Wildlife Service this summer and fall, however, the Chinese pond mussel population in Hunterdon County is eradicated, eliminating the danger of the species spreading to local waterways and, ultimately, the Delaware River.

“Under certain conditions, this invasive species could have spread across the eastern U.S., with New Jersey at the epicenter,” said Eric Schrading, the U.S. Fish and Wildlife Service’s New Jersey field office supervisor. “Early detection and eradication of the Chinese pond mussel likely saved us a tremendous amount of resources and damage to our rivers and native mussel populations. It’s a significant success in invasive species management.”

The nine ponds at the former fish farm in Raritan Township were treated from July through September 2019 with a copper-based algaecide known as Earth Tec QZ, which is approved for killing invasive mussels.

“We searched extensively after the treatments and found shells but no live mussels,” said Melanie Mason, a land steward for New Jersey Conservation Foundation. “We feel pretty confident that they’re gone, but we will follow up by doing environmental DNA testing of the water to make sure.”