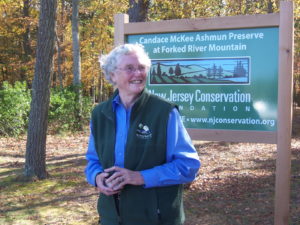 More than 75 family members, friends and colleagues of Candace McKee Ashmun gathered on Saturday, Oct. 23, as a 4,000-acre nature preserve in the Pine Barrens was named for the dedicated environmentalist, who is the current chair of the state Pinelands Commission and its last remaining original member.

A ribbon-cutting ceremony was held at Wells Mills County Park – across the street from the preserve – followed by walking and van tours of the property.

Ashmun, 82, has been a member of the Pinelands Commission since its creation in 1979, was the founding director of the Association of New Jersey Environmental Commissions (ANJEC), served on the State Planning Commission, is a trustee of the Coalition for Affordable Housing and the Environment, and serves as Vice President of the Fund for New Jersey.

At the local level, she has served on the Bedminster Board of Education, Board of Adjustment and Environmental Commission, and as vice chair of the Far Hills Planning Board. She and her husband, Charles, currently live at the Fellowship Village retirement community in Basking Ridge, Somerset County.

“Candy Ashmun is an inspiration to us all, and we want to recognize her enormous contributions toward preserving the Pine Barrens, and the quality of life in all of New Jersey,” said Michele S. Byers, Executive Director of New Jersey Conservation Foundation. “It is an honor for us to be able to name this magnificent preserve for her.”

“Candy Ashmun stands among New Jersey’s greatest champions of conservation,” agreed John C. Stokes, executive director of New Jersey Pinelands Commission. “Her wisdom and dedication have guided efforts to protect the million-acre Pinelands for more than three decades, so it is clearly fitting that one of the region’s natural treasures now carries her name.”

“As the first Executive Director of the Association of New Jersey Environmental Commissions, Candy saw ANJEC through its formative years in the 1970s,” said Sandy Batty, executive director of ANJEC. “Her vision guides the organization to this day – strong, effective environmental commissions protecting communities throughout New Jersey.”

Batty added that Ashmun remains closely connected to ANJEC. “With no job too big or too small, Candy is equally comfortable and willing to speak to the Governor or to talk to a small group of community volunteers. She has helped the state develop innovative planning and environmental protection measures, and she has also helped ANJEC solve glitches in our computers or problems with our database.”

“Candy has been the Pinelands’ guardian angel these past 30 years – always vigilant, always bringing the Pinelands Commission back to the essential mandate that it protect the Pine Barrens environment, always pressing for the path that will safeguard the integrity of the Pinelands Plan,” said Carleton Montgomery, Executive Director of the Pinelands Preservation Alliance.

Richard Greenberg of the Fund for New Jersey described Ashmun as “a person whose legacy is all around us … a superhero who traverses the state, north to south” to protect New Jersey’s environment.

The Candace McKee Ashmun Preserve, which is managed jointly with the New Jersey Division of Fish and Wildlife, is the centerpiece of about 5,000 acres of preserved forest in the area. The preserve can be accessed from Wells Mills Park on Rt. 532, between the Garden State Parkway and Route 72. New Jersey Conservation Foundation helped preserve Wells Mills Park in the 1980s. Trail maps are available at the park’s nature center.

The Forked River Mountains are covered with a globally-rare forest type known as pitch pine/scrub oak barrens, and form a ridgeline between the Cedar Creek and Forked River watersheds, which feature stately Atlantic white cedar, black gum and maple swamps.

New Jersey Conservation Foundation has protected more than 120,000 acres of open space – from the Highlands to the Pine Barrens to the Delaware Bayshore, from farms to forests to urban and suburban parks – since its founding in 1960. For more information or to become a member, click here or call 1-888-LAND-SAVE.