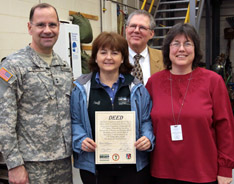 The Oswego Gun Club property, which is surrounded by Bass River State Forest and the New Jersey Air National Guard’s Warren Grove Gunnery Range, is the first in the state to be preserved by a nonprofit group using funding from the U.S. Department of Defense’s Readiness and Environmental Preparedness Initiative (REPI). This initiative provides funds to preserve land surrounding military installations. Shortly after that property closed, additional REPI funds were used toward the 5-acre Goldner tract.

“We’re proud to be part of this conservation ‘first’ in New Jersey, and we’re looking forward to partnering again with the military in the near future,” said Michele S. Byers, Executive Director of New Jersey Conservation Foundation, a private nonprofit that preserves land and natural resources throughout New Jersey.

Maj. Gen. Glenn K. Rieth, the state Adjutant General and commander of all National Guard forces in New Jersey, said that the arrangement will serve the taxpayers, environment and the nation’s defense. “This is a win for all parties concerned,” Rieth said. “The purchase and conservation easement ensures this land is managed in the most cost-effective and environmentally friendly way while ensuring the Warren Grove Range is able to continue as a vital East Coast training facility for combat aviation.”

“Through partnering with the Air Force and conservation organizations, we were able to come together to meet common goals of preserving the habitat, preventing encroachment, and creating buffers around military installations,” said Bob Moore, Director of the Air Force Real Property Agency.

The Oswego Gun Club property is a remote Pine Barrens wilderness crossed by sand roads and the Buck Run, a tributary of the Oswego River. It is home to a significant population of timber rattlesnakes, one of the state’s most endangered species, as well as Pine Barrens tree frogs. The Goldner property is an Atlantic white cedar swamp completely surrounded by Bass River State Forest.

Chris Jage, New Jersey Conservation Foundation’s Assistant Director for south New Jersey, said the Oswego Gun Club decided to sell the property because its members did not plan to use it much longer and wanted to see it permanently preserved.

According to Jage, the preservations are part of a long-term effort to preserve the forested “in-holdings” within state forests surrounding Warren Grove. “This consolidation will allow the state and New Jersey Conservation Foundation to manage the entire forest for conservation and recreation purposes,” he explained. “This will result in improved fire hazard reduction and management.”

John C. Stokes, Executive Director of the Pinelands Commission, said the Oswego Gun Club project is a prime example of how collaborative efforts can greatly benefit the Pinelands and the sensitive ecosystem it sustains. “The Commission is proud to help preserve this and thousands of additional acres of land with special natural resources, such as habitat needed for rare plants and animals to survive and thrive.”

Thus far, the Commission has allocated and awarded more than $3.7 million from the Fund toward the permanent preservation of 3,027 acres of environmentally-sensitive land in the Pinelands. Hundreds of additional acres are in the process of being preserved through the Fund.

According to Michael Catania, President of Conservation Resources Inc., which serves as a consultant to the Commission to help administer the Pinelands Conservation Fund, “This transaction exemplifies the incredible effectiveness of public/private partnerships in preserving key parcels of land and providing excellent leverage of both public funds and private resources.”

New Jersey Conservation Foundation is celebrating its 50th anniversary of preserving land and natural resources throughout New Jersey for the benefit of all. Since 1960, it has protected more than 120,000 acres of open space – from the Highlands to the Pine Barrens to the Delaware Bayshore, from farms to forests to urban and suburban parks. New Jersey Conservation Foundation has been in the forefront of land preservation policy, including historic laws protecting the Pine Barrens, Highlands, farmland, water quality and every Green Acres open space initiative. For more information, click here or call 1-888-LAND-SAVE.