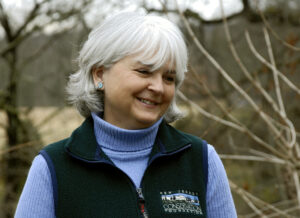 Michele S. Byers, the longtime head of the nonprofit New Jersey Conservation Foundation, announced this week that she will retire from her role as executive director at the end of the year.

Byers, only the third executive director in the organization’s 61-year history, served in the top leadership role since 1999. She began at New Jersey Conservation Foundation in 1982 as an intern in the Pine Barrens.

With Byers at the helm, New Jersey Conservation Foundation permanently preserved about 60,000 acres of open space and farmland (nearly half of the preserved land in the organization’s history), significantly expanded its system of public nature preserves, and helped strengthen New Jersey’s conservation community and partnerships.

She plans to continue working with the organization in other capacities to further advance land and natural resource protection in New Jersey.

New Jersey Conservation Foundation’s Board of Trustees will soon begin the process of choosing her successor.

“Michele is passionate about the environment, and has built New Jersey Conservation Foundation into one of the foremost land conservation organizations in the nation, with a top-notch team of conservation professionals,” said Rosina Dixon, president of the Board of Trustees. “We thank Michele for all the years she has devoted to protecting New Jersey’s land, wildlife, air and water.”

“It is hard to think of an environmental initiative in the past 30 years where Michele has not been one of the leaders,” said former Governor Thomas Kean, who serves as an honorary trustee of New Jersey Conservation Foundation.

“Michele has provided exemplary leadership in many key environmental protection efforts that have reached beyond New Jersey in their influence and impact,” said former Governor Christine Todd Whitman, another honorary trustee. “She was one of a handful of leaders who worked with me and several NJ governors to protect critical parcels from development and to ultimately secure broad protections for the region.”

“Michele stands out for her record as an inspiring, dedicated, and effective leader—and also for being a really nice person,” said Larry Rockefeller, a prominent environmental advocate and philanthropist who worked closely with Byers to protect the historic viewshed of the Hudson River Palisades.

Under her leadership, New Jersey Conservation has:
• Established several new signature preserves, including the 11,000-acre Franklin Parker Preserve in the Pine Barrens of Burlington County, the 300-acre Mount Rose Preserve in Mercer County, the 300-acre Hill and Dale Preserve in Hunterdon County, the 230-acre Maureen Ogden Preserve in Morris County, the 800-acre Rechnitz Pine Barrens Preserve in Burlington County, and the 1,200-acre Rainbow Hill Preserve at Sourland Mountain in Somerset and Hunterdon counties. These preserves offer the public recreation opportunities like hiking, bird-watching and bicycling.
• Founded several conservation organizations, including the Pinelands Preservation Alliance, New Jersey Highlands Coalition, Hunterdon Land Trust, Whitesbog Preservation Trust, and New Jersey League of Conservation Voters. New Jersey Conservation Foundation continues to work in close partnership with these groups and more than a dozen others Michele helped to get off the ground.
• Helped secure passage of the NJ Highlands Water Quality and Planning Act which protects the drinking water supply for 70 percent of New Jersey’s residents.
• Launched New Jersey Conservation Foundation’s work in the Cooper River Greenway in Camden, ultimately opening the 25-acre Gateway Park and establishing a full-time staffed office. The organization is continuing its program to expand parks and recreation opportunities in Camden.
• Founded the Rethink Energy NJ campaign to stop the proposed PennEast pipeline from being built in Hunterdon and Mercer counties, damaging hundreds of acres of preserved land. The campaign advocates for a transition from fossil fuels to clean and renewable energy, and to reduce the impacts of climate change. Michele serves as President of Rethink Energy NJ.
• Secured a settlement with LG Electronics and the Borough of Englewood Cliffs to protect the historic Palisades Cliffs viewshed. LG agreed to reduce the height of its new headquarters to better blend with the existing tree line at the top of the Palisades Cliffs.
• Established the Conservation Assistance program and the annual New Jersey Land Conservation Rally to provide shared staffing support, funding, technical assistance and educational resources to New Jersey’s land conservation community, and to foster collaboration and partnerships between the groups.
• Brought New Jersey Conservation Foundation’s board restricted endowment funds to almost $10 million in 2021 from $1 million in 1999.

Michele has received many awards and honors recognizing her achievements, including being named the 2020 Garden Club of America Honorary Member in the field of conservation. Others include the 2014 Plan Smart NJ Environmental Achievement award; the 2014 Woman of Achievement award from the New Jersey State Foundation of Women’s Clubs; the 2016 Tribute to Women award from the Boy Scouts of America; and the 2006 Garden Club of America Zone IV Conservation Commendation award.