HARDING TWP. – Surrounded by the scenic beauty of the Great Swamp Wildlife Refuge, New Jersey Conservation Foundation, members of the NJ congressional delegation and New Jersey conservation leaders celebrated the full and permanent funding of the Land and Water Conservation Fund (LWCF), a federal program that has enabled the acquisition and development of thousands of acres of open spaces and recreation areas in New Jersey. This victory for LWCF – which was years in the making – was part of the Great American Outdoors Act (GAOA) legislation, signed into law in early August. Since 1965, LWCF has invested in land preservation and recreation projects in every state and almost every county.

The Great Swamp Wildlife Refuge is among the many New Jersey special places preserved through LWCF, financed entirely by revenues from offshore oil and gas leases, not tax dollars.

Through the passage and signing of the Great American Outdoors Act (GAOA), LWCF has been made permanent, a huge effort that Congresswoman Mikie Sherrill (D-NJ) and Congressman Chris Smith (R-NJ) and the entire New Jersey Congressional Delegation helped lead.

“I am excited to join New Jersey Conservation and the local community to celebrate the passage of the Great American Outdoors Act at the Great Swamp today. It is a reminder of why we worked so hard to pass this landmark legislation, which includes full and permanent funding for the Land and Water Conservation Fund,” said Representative Sherrill. “I frequently highlighted the Great Swamp as I worked to build support from Members of Congress to sign on to the Great American Outdoors Act. This bipartisan legislation is a historic investment in our open spaces, will help us jumpstart our economic recovery from the COVID-19 crisis, and will protect New Jersey’s natural resources and public lands for generations to come. I thank New Jersey Conservation and all the organizations who worked alongside us to champion this legislation.”

“We have been fighting a long time to permanently authorize the LWCF,” Congressman Smith said in a letter read by his staff at the event. “The new law signed by President Trump assures a steady, reliable federal investment – and the private partnership funding it will generate for critical conservation projects. The law also funds much-needed maintenance at national parks and federal lands that has been backlogged for years. In New Jersey, we are particularly fortunate to have many environmental treasures – including coastal areas, wetlands and wildlife sanctuaries – that already benefit from the LWCF and by fully stabilizing the fund we are assuring that New Jersey citizens will have more and better protected outdoor landscapes to visit and enjoy in the future.

“The Land and Water Conservation Fund provides tremendous benefits to New Jersey and everywhere in the nation,” said Michele S. Byers, Executive Director of New Jersey Conservation Foundation. “It is far and away our nation’s most important conservation program, and now that it’s been made permanent, we can move forward to protect the natural lands still needing preservation in New Jersey.”

“The Great American Outdoors Act and the full and permanent funding of the Land and Water Conservation Fund is a generational conservation triumph. The Appalachian Mountain Club, a leader in the nationwide LWCF Coalition, is grateful for Congresswoman Sherrill’s and Congressman Smith’s efforts in Congress to shape the future of conservation in New Jersey and across the country,” said Kimberly Witt, Mid-Atlantic Policy Manager, AMC.  “By voting yes on GAOA, the New Jersey Congressional delegation supported decades of work by thousands of nonprofit organizations, businesses, elected officials, recreationists and other stakeholders, as well as hundreds of thousands of AMC members and outdoor enthusiasts. This long-term, grassroots engagement shows that conservation is a critical issue for the future of our country and our planet, and it is a winning issue that unites people around the value of the outdoors.”

“Great Swamp Watershed Association is thrilled that the Great American Outdoors Act has become law. We are so thankful that Congress has taken action on behalf of our environment. The need for open space and safe places to recreate is more important now than ever before. Our national parks and national wildlife refuges are truly national treasures. This legislation provides crucial funding for their support,” said Sally Rubin, Executive Director, Great Swamp Watershed Association.

“The Coalition for the Delaware River Watershed applauds our Congressional representatives for prioritizing conservation and bipartisanship to get the Great American Outdoors Act across the finish line. The watershed states of New York, New Jersey, Pennsylvania, and Delaware have all benefited from previous Land and Water Conservation Fund dollars, and we’re excited to see permanent, full funding flow to our outdoor recreation infrastructure and protect land that is essential to healthy water quality and wildlife habitat,” said Sandra Meola, Director, Coalition for the Delaware River Watershed.

“The Nature Conservancy in New Jersey salutes the entire Congressional Delegation who supported the passage of the Great American Outdoors Act,” said Barbara Brummer, Executive Director, The Nature Conservancy New Jersey Chapter.  “This legislation is the most important U.S. conservation bill in a generation, creating a lasting path for the future of New Jersey and the country’s public lands, while supporting jobs and our well-being.  This victory would not have happened without the dedication of so many champions who worked tirelessly over many years to secure permanent funding for The Land and Water Conservation Fund.” 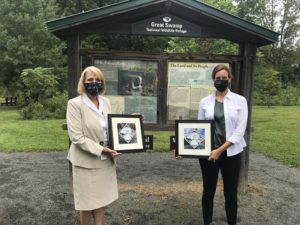