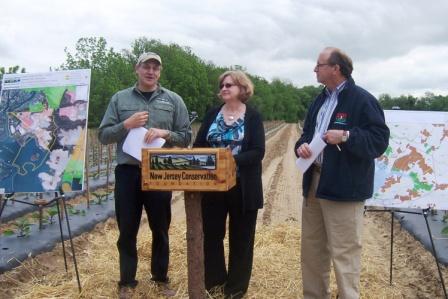 New Jersey Conservation Foundation announced the preservation of a 476-acre farm in Mannington Township, Salem County – a move that ensures the permanent protection of 279 acres for agriculture and nearly 200 acres in the Mannington Meadows for their rich natural resource value.

The diverse property – which includes an 11-acre forested island in the Salem River – contains cultivated farmland, woods, tidal marshes and freshwater wetlands, and is a haven for birds and wildlife.

“We are thrilled to be able to preserve this important farm to strengthen agriculture in the region and to protect the unique ecosystem of Mannington Meadows,” said Michele S. Byers, Executive Director of New Jersey Conservation Foundation, a private nonprofit celebrating its 50th anniversary this year. “The importance of this property – from both agricultural and ecological standpoints – made it one of our top priorities in the entire state for preservation.”

Frank Fichera, who sold the farm for preservation, has been farming all his life. Fichera purchased the first piece of this farm in 1960 and kept adding to it over the years. Under a lease with New Jersey Conservation Foundation, he will continue to farm the portion of the property that has been permanently preserved for agriculture.

“I wanted to preserve it because it’s an excellent farm, with good soils,” said Fichera, who grows tomatoes, asparagus, peppers, eggplants and cucumbers on the farm. He also owns two other farms in Mannington Township – farming a total of 350 acres – and has no plans to retire.

“More than land protection, the Fichera acquisition is part of our work to promote a viable agricultural industry in the South Jersey farm belt,” said Byers. “This project is an outgrowth of our Tri-County Agricultural Retention Partnership. In 2006, a proposed residential development of up to 3,000 homes on the Mannington Meadows signaled that this important farming region was squarely in developers’ sights, so New Jersey Conservation Foundation stepped up our efforts to protect the Meadows’ rich agricultural and natural resources.”

The property is located at the northern end of the Mannington Meadows ecosystem and borders the state’s Salem River Wildlife Management Area. The Mannington Meadows are a 6,000-acre tidal ecosystem within the Salem River watershed surrounded by thousands of acres of highly productive farmland. The Meadows teem with wildlife, including river otter and muskrat, and provide bountiful hunting grounds for bald eagles, ospreys, herons and egrets. They are an important stopover for migratory birds, and a dolphin was recently spotted feeding on baitfish in the marsh. Stands of wild rice, spartina, American lotus and pickerelweed grow in tidal areas.

The Fichera property will be used by New Jersey Conservation Foundation to demonstrate the intricate relationship between agriculture and natural resources in the region, and to promote sustainable agriculture. A portion will be open to the public for nature observation, hiking, fishing, canoeing and kayaking.

“We were pleased to be able to provide key funding for this cooperative project, which builds on our continuing investment in preserving farmland in Mannington Township and Salem County to ensure that agriculture remains an important part of our communities for future generations,” said Agriculture Secretary Douglas H. Fisher, who chairs the SADC.

Within four miles to the east of the Fichera farm, approximately 5,000 acres of farmland have been permanently preserved, including the nearly 1,800 acres of Seabrook farmland preserved by the SADC in 2008. Mannington Township ranks third in the state in acreage preserved under the program, with more than 5,400 acres permanently protected.

“The Fichera farm includes some of the best soils in Salem County and is located in close proximity to ecologically valuable wetlands, streams, rivers, and forests. This area has been producing crops, feeding New Jersey residents and providing habitat for native plants and wildlife for more than 200 years,” said Janice Reid, assistant state conservationist for the Natural Resources Conservation Service (NRCS), which administers FRPP funding. “The Ficheras have been excellent land stewards and have worked with NRCS for over 40 years. Preservation of this area will ensure that a significant farm ecosystem will be here in perpetuity to continue to provide conservation benefits for generations to come.”

“We are pleased to have partnered with the New Jersey Conservation Foundation to preserve this unique property,” said DEP Commissioner Bob Martin. “It’s part of a continuing commitment Gov. Christie and I have made to preserving the state’s open spaces. This acquisition preserves critical habitat for a host of resident and migratory species, including the Bald Eagle. It’s quite a special property.”

“As communities in the Delaware Bayshore evolve and encounter intensifying development pressure, it is increasingly important to proactively and deliberately act to protect and promote the region’s primary assets—its critical mass of productive farms, internationally important natural habitat, and clean water– in ways that will support sustainable economic growth and opportunity for the people who live there,” said Andy Johnson of the William Penn Foundation. “The Foundation is pleased to be involved with the Fichera acquisition because it demonstrates that this balance is well within South Jersey’s grasp.”

New Jersey Conservation Foundation is celebrating its 50th anniversary of preserving land and natural resources throughout New Jersey for the benefit of all. Since 1960, it has protected more than 120,000 acres of open space – from the Highlands to the Pine Barrens to the Delaware Bayshore, from farms to forests to urban and suburban parks. New Jersey Conservation Foundation has been in the forefront of land preservation policy, including historic laws protecting the Pine Barrens, Highlands, farmland, water quality and every Green Acres open space initiative. For more information, click here or call 1-888-LAND-SAVE.