442 Acres Preserved in the Heart of the Pine Barrens 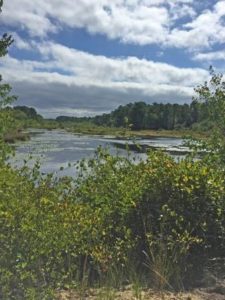 A former cranberry farm in Burlington County, owned by the same family since the Civil War, has been permanently preserved as open space, protecting clean water and the wildlife it supports.

On Aug. 31, New Jersey Conservation purchased 442 acres off Route 70 in Woodland and Southampton townships for $560,000. The property includes 5.5 miles of streams, including the pristine Burrs Mill Brook, a tributary of the Rancocas Creek.

The land was purchased from the Thompson and Wright families, which owned the Birches Cranberry Company. Birches was most recently owned and managed by members of the Thompson family.

According to family member Fred Wright, the land was part of a larger parcel acquired by his great-grandfather, Martin Luther Haines, around the time of the Civil War. The land was passed down to three succeeding generations of the Haines, Wright and Thompson families, with some acreage sold to other cranberry growers in recent years.

Cranberry production on the newly-preserved property stopped in 2004, and the land has been naturally reverting to wetlands and pitch pine forest.

“This is a gorgeous property, with the Burrs Mill Brook running along its entire length and old cranberry bogs being reclaimed by nature,” said Michele S. Byers, executive director of New Jersey Conservation Foundation. “We’re very grateful to our preservation partners for making this project possible.”

The land will be open to the public for passive recreation, including hiking, birding and nature observation. Existing sand roads bordering the former cranberry bogs offer stunning views of wetland habitats and will form the basis of a future trail system. The land will be managed as part of NJ Conservation’s 1,227-acre Michael Huber Prairie Warbler Preserve, located less than a mile to the east on Route 70.

The property lies within the Forest and Preservation areas of the New Jersey Pinelands, a critical ecological region that supports diverse plant and animal communities. It acts as a stepping stone between the tidal Rancocas Creek and the Atlantic Coast, providing prime habitat for numerous threatened and endangered species and migratory birds.

Priority species that may breed on the property include American black and mallard ducks. Ring-necked and northern pintail ducks are common migrants, buffleheads have been observed at the site, and wood ducks are found in the region.

The Pinelands Commission provided $169,000 toward the acquisition through the agency’s Pinelands Conservation Fund. “We are pleased to help preserve this outstanding property,” said Nancy Wittenberg, Executive Director. “Permanent land protection is a critical part of the Commission’s mission to preserve the Pinelands’ ecosystem.”

“Through this acquisition, the New Jersey Conservation Foundation’s active presence and management of the site will help to eliminate future damages wrought by off-road vehicles,” Wittenberg said.

The property contained Pinelands Development Credits (PDCs), which were extinguished when New Jersey Conservation purchased the land. If not extinguished, those credits could have been used to increase residential development.

“The Rancocas Conservancy discussed the importance of preserving this property a decade ago,” said Rob Hofstrom, a conservancy trustee. “Its linear shape allows a long stretch of Burrs Mills Brook to be protected from development, thereby keeping intact the natural riparian buffer.

“The project fits into the Conservancy’s mission to preserve and protect the Rancocas Creek Watershed, in this case by maintaining a healthy tributary,” added Hofstrom. “Thanks to New Jersey Conservation Foundation for leading this project to a conclusion, and to Green Acres for assistance that enabled the Conservancy to make a financial contribution to the acquisition.”

“We congratulate all the partners who made this acquisition possible,” added Green Acres Program Director Martha Sullivan Sapp. “People will be able to come here to enjoy the serenity, scenery, and wildlife unique to New Jersey’s Pinelands.”

The Thompson-Wright property is important for the health of the Delaware River because it protects the wetlands and forested headwaters of the Rancocas Creek, which travels through the New Jersey Pinelands and into the Delaware. The creek is the largest tributary of the river from the Pinelands, producing approximately 10 percent of the river’s total flow.

“This is a milestone for the Delaware River, and for the 15 million people who depend upon the river’s unspoiled forests to protect their drinking water,” said Peter Howell, OSI’s Executive Vice President of Capital & Research Programs. “We congratulate the New Jersey Conservation Foundation on this remarkable achievement, which will benefit New Jersey for generations to come.”

Preservation of the Thompson-Wright property bolsters the protection of the Kirkwood-Cohansey Aquifer, an underground sediment layer in South Jersey that stores 17 trillion gallons of pure, fresh water and provides for the drinking water needs of about a million New Jersey residents.

The aquifer lies close to the land surface and also supplies much of the water in the rivers, streams and wetlands of the Pine Barrens.

Funding was also contributed by Victoria Foundation, The Nature Conservancy and the U.S. Fish and Wildlife Service’s Division of Bird Habitat and Conservation.

“A core mission of Victoria Foundation is to protect New Jersey’s drinking water supply,” said Irene Cooper-Basch, executive officer of the Newark-based foundation. “Helping to permanently preserve the Thompson-Wright property was an easy decision for us as its strategic location in the Pine Barrens will safeguard critical wetlands and pristine streams that feed into our aquifer.”

“We are so pleased to have assisted the NJ Conservation Foundation in the protection of this property in the Pinelands,” said Barbara Brummer, New Jersey State Director of The Nature Conservancy. “This region has so many unique values and it is critical to keep its habitats connected and resilient.”