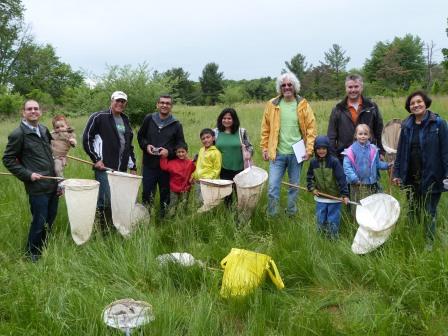 More than three years after the Mount Rose Preserve was created at the site of the former Western Electric/AT&T property on Carter Road, an additional parcel of land for the 350-acre public park has been secured.

On Oct. 9, New Jersey Conservation Foundation purchased 11 acres where the Western Electric’s large conference center/hotel once stood on the west side of Carter Rd. Opened in 1959, the center was abandoned many years ago. The building was finally demolished and the land restored to open space per the terms of New Jersey Conservation’s contract to purchase the site.

“These 11 acres were the proverbial hole in the doughnut, since the surrounding land was preserved in 2015,” said Michele S. Byers, Executive Director. “We’re now looking forward to transforming it into a meadow of native plants and wildflowers, with a new trail for the public.”

New Jersey Conservation paid $52,250 for the land. “We’re very grateful to Mrs. Betty Wold Johnson, whose generosity made the final 11-acre purchase possible,” said Katherine Dresdner, Esq,. who led the legal fight to preserve the land from inappropriate development in 2007 and worked with New Jersey Conservation to raise the funds for the project.

“I am very pleased that the final 11 acres have been purchased and the land is restored for the public to enjoy. It is a dream come true,” added Dresdner. “I want to thank the many partners, particularly Mercer County, Hopewell Township and New Jersey Conservation, who came together to make this new park a reality.”

Mercer County Executive Brian M. Hughes praised the new purchase. “With the removal of the former Western Electric conference center and acquisition by New Jersey Conservation Foundation, these additional acres will expand the Mount Rose Preserve, a significant natural resource in Hopewell Township,” he said. “The County is pleased to be working in partnership with New Jersey Conservation, Friends of Hopewell Valley Open Space and the Township of Hopewell to safeguard the Preserve as an amenity for the residents of Mercer County and beyond.”

“Hopewell Township is very happy to see these 11 acres added to the Mount Rose Preserve, and we’re looking forward to seeing a new native meadow and hiking trail on the site,” said Mayor Kevin Kuchinski.

The bulk of the Mount Rose Preserve was acquired in April 2015 by a partnership of more than a dozen public agencies and nonprofit organizations, as part of an innovative project to convert the 1950s corporate campus into a public park.

The Mount Rose Preserve property was originally developed as a corporate park on both sides of Carter Rd. in Hopewell Valley for Western Electric/AT&T and was the first of its kind in the United States.

If it had not been preserved, this environmentally significant property with two high-quality streams in the Stony Brook watershed would have been used for 800,000 square feet of commercial office space and a high-density housing project, bringing over 4,000 vehicles a day to rural Carter Road and threatening the region’s water resources.

The Mount Rose Preserve is now owned and managed by a partnership including New Jersey Conservation Foundation, Hopewell Township, Mercer County, and the Friends of Hopewell Valley Open Space.

In addition to protecting water resources, the park provides critical habitat for threatened and endangered species, and a key link for the northern loop of the Lawrence-Hopewell Trail-a 30-mile regional trail system dedicated to walkers and cyclists.

New Jersey Conservation Foundation is a private nonprofit that preserves land and natural resources throughout New Jersey for the benefit of all. Since 1960, New Jersey Conservation has protected 125,000 acres of open space – from the Highlands to the Pine Barrens to the Delaware Bayshore, from farms to forests to urban and suburban parks. For more information about the Foundation’s programs and preserves, click here or call 1-888-LAND-SAVE (1-888-526-3728).